The Australian Renewable Energy Agency (ARENA) has announced the official completion of a 30 MW / 8 MWh grid-scale battery at the Dalrymple substation on South Australia’s Yorke Peninsula.

ARENA provided $12 million in funding towards the construction of the $30 million Energy Storage for Commercial Renewable Integration (ESCRI) project.

After construction was completed in April 2018, ESCRI has been commissioned and tested and is now live and connected to the National Electricity Market (NEM), making important contributions to energy security and reliability in South Australia.

Transmission provider ElectraNet developed and owns the ESCRI battery, which was built next to, and connected to their Dalrymple substation.

AGL will operate the battery under a long-term lease agreement.

“We’re excited to see that the completion of the ESCRI battery has already helped inform the development of further battery projects around Australia,” she said.

“The ESCRI battery will provide storage to support renewable generation and will provide fast frequency response to stabilise the grid.

“The battery will also work with the 90 MW Wattle Point Wind Farm, and local rooftop solar, to provide contingency power to the households and businesses on the Yorke Peninsula if a power outage occurs.

“It is clear that grid scale energy storage has a role to play in our future energy mix. ESCRI demonstrates that utility scale batteries can deliver a range of market services and back up power when it is needed.”

ElectraNet chief executive Steve Masters said the new battery is the first large-scale battery in the NEM to provide both regulated network services and competitive market services to maximise value from its operation. Services include supplying back up power to Yorke Peninsula customers in the event of an unplanned outage.

“On average, it can provide backup power to 4500 customers in the Dalrymple service area for two to three hours while connection to the grid is being restored,” Mr Masters said. 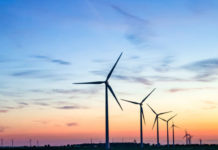 GE to help deliver wind energy to 375,000 homes in Scotland

The coastal town of Denham may host a hydrogen demonstration project as part of a new energy solution planned for the town – full story: https://t.co/OwLK7Th8Ck #esdnews #energy #hydrogen